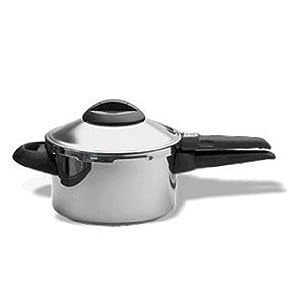 Not your mother's pressure cooker!
I grew up using a Mirro pressure cooker, but when I decided to buy one I wanted a small, non-aluminum one, so swallowed hard and plunked down the bucks for this Cadillac model. What a fine item! I've made fresh green beans (under pressure for 2 minutes!) and cook chicken breasts for chicken salad (10 minutes!), usually don't even need to have the heat on once the top is sealed. I know that it won't be paying for itself with energy savings, but I still feel better not heating up the kitchen so much, and using a steel cooker rather than aluminum. The pressure level lines on the top are very easy to read, and the instruction books have a good variety of recipes and ideas. Replacement parts will be more expensive than for cheaper models, but I consider that the price of using such a fine piece of equipment.

I have two of these pressure cookers, the 2.5 L frying pan and a 6L pot and I use these routinely, especially the frying pan.

When I get home from work, I can fry chicken in about 10 minutes from the time it hits the grease.

I 'steam' potatoes (peeled and quartered) for 5-10 minutes, then use the cooked potatoes for mashed potatoes. Since they have never been immersed in water, they have the absolute maximum of flavor and nutrients. Everybody raves about these mashed potatoes, especially if they are made with something like Klondike potatoes. It just about as fast using the pressure cooker as it is to make instant mashed potatoes in the microwave.

I cook pot roast, chicken cacciatorre, stews, soups and especially bean dishes and brown rice. I turn the heat up to high until the second ring is exposed and then turn the burner down to the absolute minimum. It really does save a considerable about of energy and time. If you have a family of 4, get the 2.5 L frying pan. You'll never regret it.

This is my FOURTH K-R Pressure Cooker. I bought this one because it's such a great size for smaller meals/vegetables/soups. Also I really love the Duromatic Top�, it's a real improvement over the older style as it is so much easier to read the markings at a distance and it is effortless to release the pressure as you can just rotate the knob and walk away. I just love cooking in my pressure cookers.

Posted by Tamsyn Challoner at 6:18 AM